The 2021 Autumn debate was held at BAFTA Piccadilly. A welcome return to in person, physical debate.

With the governments focus on beauty in the built environment the challenge was set to the cohort to discuss whether ornament really is a crime?

Preceding the discussions, a poll was taken to assess the mood in the room:

Adolf Loos recognised the danger of ornament 110 years ago. Arguably one of the most important architects of the 20th century. In 1910 he shocked the establishment with his bold ideas as the world advanced quickly into an industrialised society. Loos recognised that ornament uses too much of the earth’s resources. From Bauhaus, Aalto to Zumthor the modern architectural movement showed how architects can be artistic without the need for wasteful ornament. In a time where embodied carbon is of primary importance given the climate crisis any waste or excess should be avoided. Therefore, the motion should be supported.

Vitruvius did not mention ornament in his thoughts on good architecture. Firmness, commodity, and delight are to be sought through economy of means, architecture that is intrinsically delightful. The history of architecture shows us that ornament is not required, this wastefulness is undeniably a crime.

Ornament is the equivalent of advertising, to make us want to like something. Ornament does not address the serious needs of society, it creates wasted manpower and resource, it is self-indulgent and does not stand the test of time. Architecture is about use not about aesthetic, architecture should be made to be popular and to be beautiful in response to the context and to the brief. Generating emotion doesn’t need to be ornamental, honest and truthful architecture derived from purpose. Creatively solving problems brings experience, delight, and emotion.

The Ionic, the Corinthian column are decoration for decorations sake. The addition of elements in architecture that have no practical purpose is superfluous and meaningless. We should be encouraging sustainable development and the greening of the city. We should instead of decorating architecture be considering a green column for our modern times.

The question of excess in any way is now an issue. The synthesis of architecture, the enjoyment of being in a building that is well made like the BAFTA building the debate is taking place in.

Ornament is not a crime.

This is familiar territory in this debate. There seems to be nothing new, and we seem to have been here before. Why is this debate being rehashed? An anachronistic debate similar to the tedious style war of the 80s. However, this debate started much earlier and one only needs to look to ‘Fountainhead’ in the 1940’s to see the same debate raging between Keating (for ornament) and Rawke (against). Ornament and Crime eminates from the architect Adolf Loos however given his convictions regards racism and paedophilia this is not a good model for the 21st Century. Now is not the time to turn the clock back. We should be looking forward to a better balance with nature and different points of view, we should be less intolerant to other ideas.

What is ornament? There is a question of scale. Ornament on buildings or should we admit that buildings themselves can be ornament? The Barbican is a series of ornaments on the skyline. Lloyds by RSHP is ornament, 22 Handyside Street by Coffey Architects, The Velodrome by Hopkins Architects. Are we always to fit in? We need to admit to ourselves that as architects we can and do ornament the city at an urban scale. Everything we make is ornamental in its own way, to make buildings that are lovely that do not succumb to the new brick vernacular, the wallpaper of London. People notice this ornamentation of the city, ornaments are architects celebrating life, we have all done it. Therefore, ornament cannot be a crime, otherwise we should all be ‘banged up’.

Ornament is all around us. London is one of the most decorated cities in the world. Ornament is a human need and a human right, history tells us this. The volume of ornament can be turned up or down. Ornament is not binary and can be seen at differing levels, incredible decoration when the budget allows or reductive where not, such as in Victorian homes where decoration may exist only above the front door. Ornament is therefore the ability to freely express oneself where one can. Ornament does not create harm and as such to condemn it as a crime is to limit free speech and expression. To argue for the motion, one is killing our freedom of expression. Therefore, the motion cannot be supported.

There was no agreement on the conclusion of the debate that was undertaken in a serious but lighthearted atmosphere.

The side arguing for the motion concluded, with humour, that they recognised they were defending an architect, in Loos, with less than the perfect history. Despite the argument for free speech, they argued they were open to pluralism in its finest sense. It was felt from their side that the question of ornament at an urban scale was ducking the issue regards architectural ornamentation. Architecture should raise the bar through inventiveness and craftmanship, not ornament, more Copenhagen than Las Vegas. Concluding that the other side were guilty, not innocent of the crime of defending ornament.

The side arguing against the motion noted that ornament is part of the architects dialect and to restrict vocabulary is not helpful or progressive. Freedom is important and the ability to create, which is reduced in so many other ways through the process of making architecture, should not be further hindered by the self-restriction of architects to use ornament. There was a feeling that the argument becomes moralistic rather than practical and the moralisation of the argument from the other side is in itself a criminalisation of the use of ornament.

The final vote was overwhelming in favour of the motion.

Below is a selection of artwork by Club member and artist Hugo Dalton produced throughout the evening.

Artist Hugo Dalton makes drawings to understand buildings and create visual diary of places and the people within. These are a compliment to his art practice which centres around wallpainting and sculpture. Dalton’s collabrations include Derwent London, The Royal Opera House and the Fitzwilliam Museum, Cambridge. www.hugodalton.com 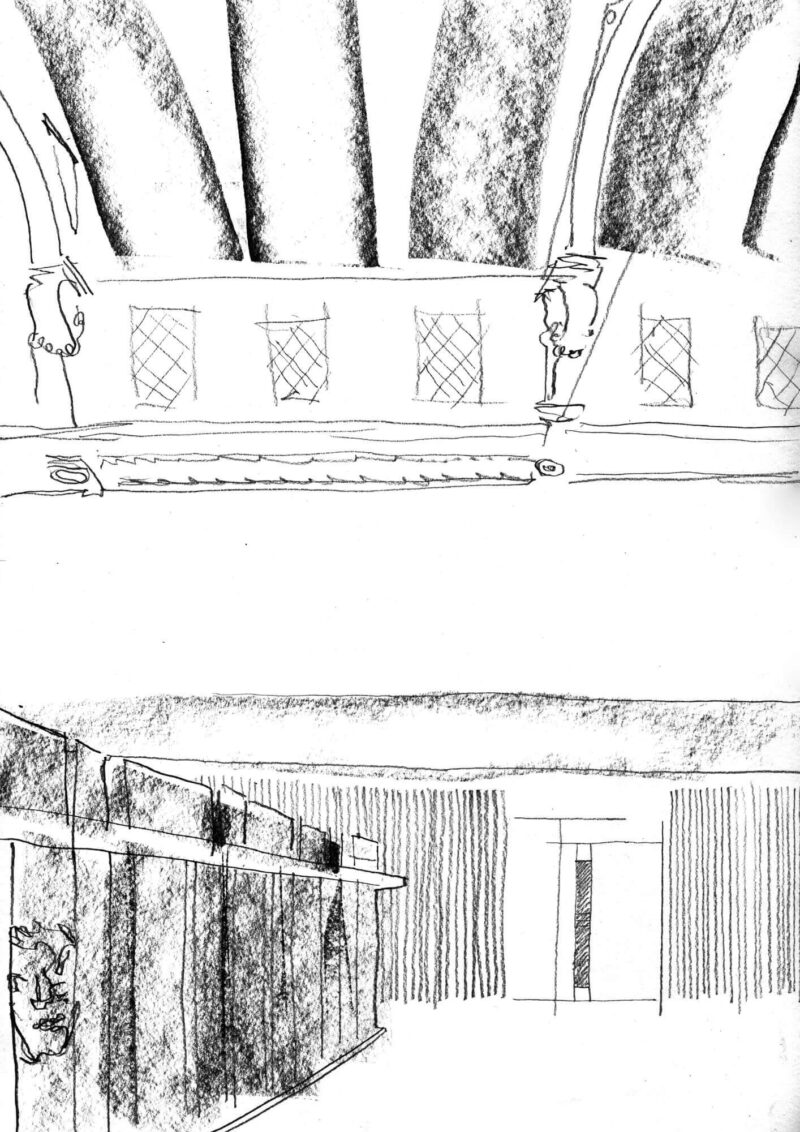 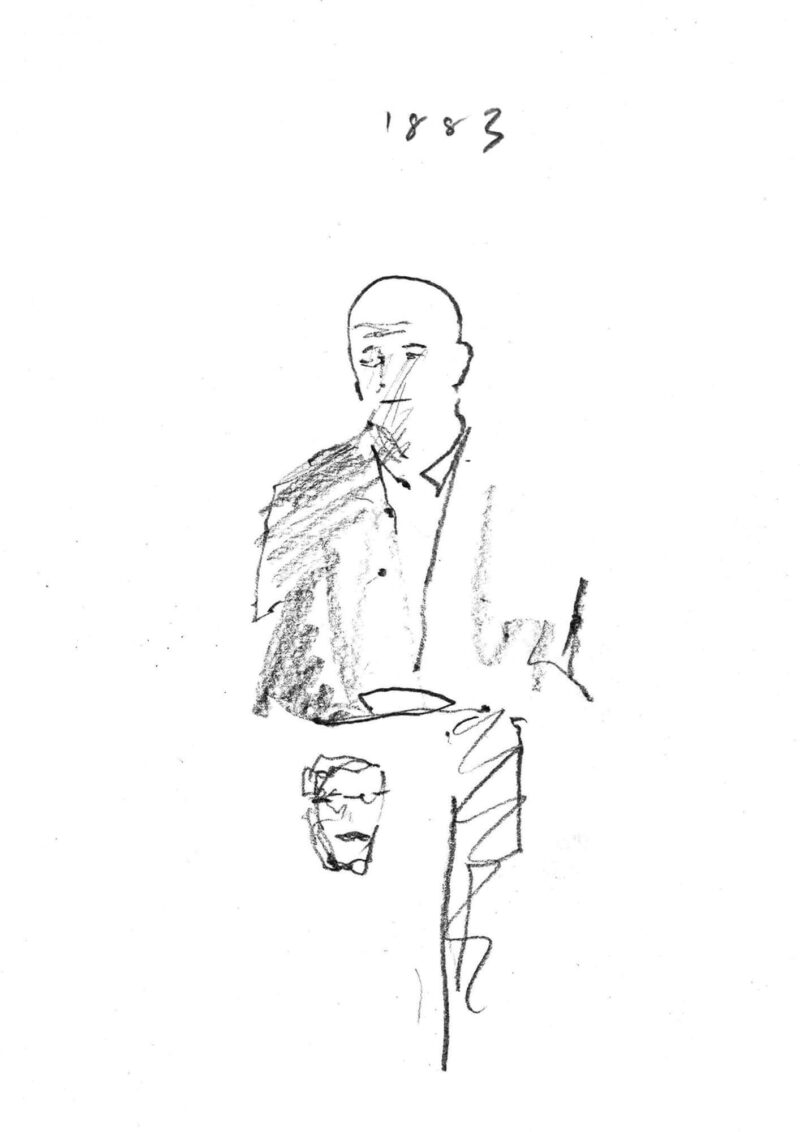 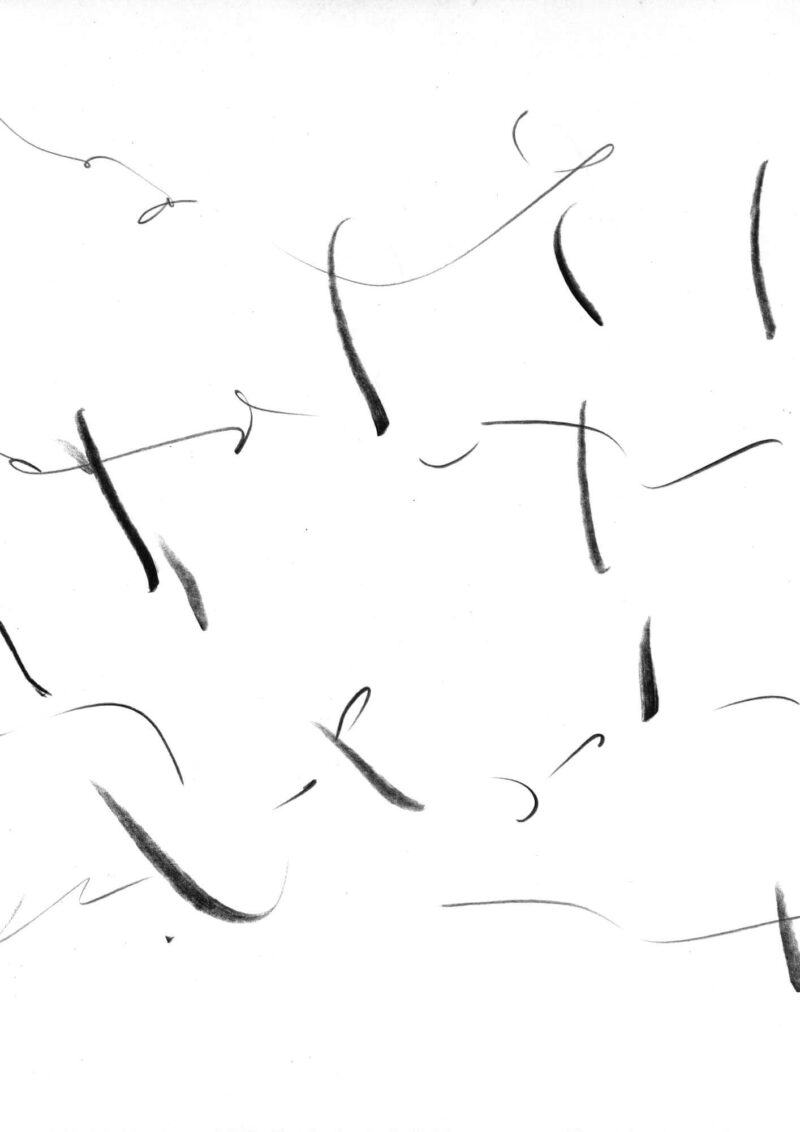 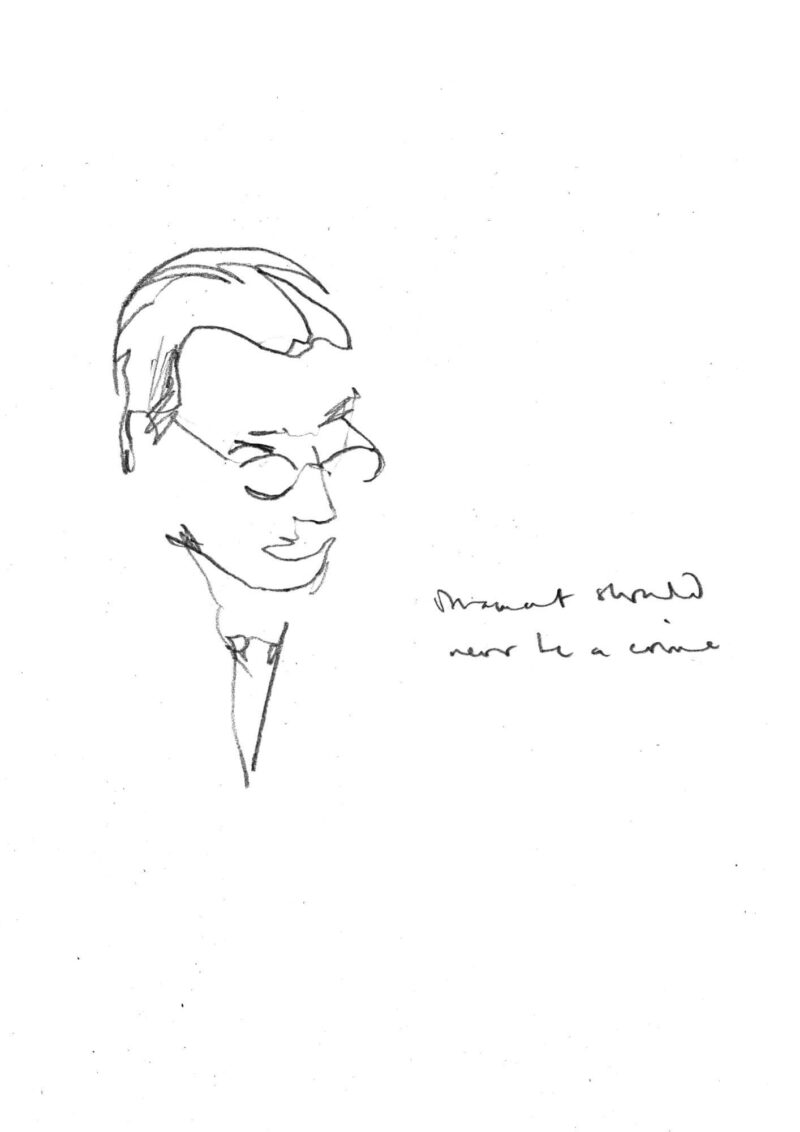 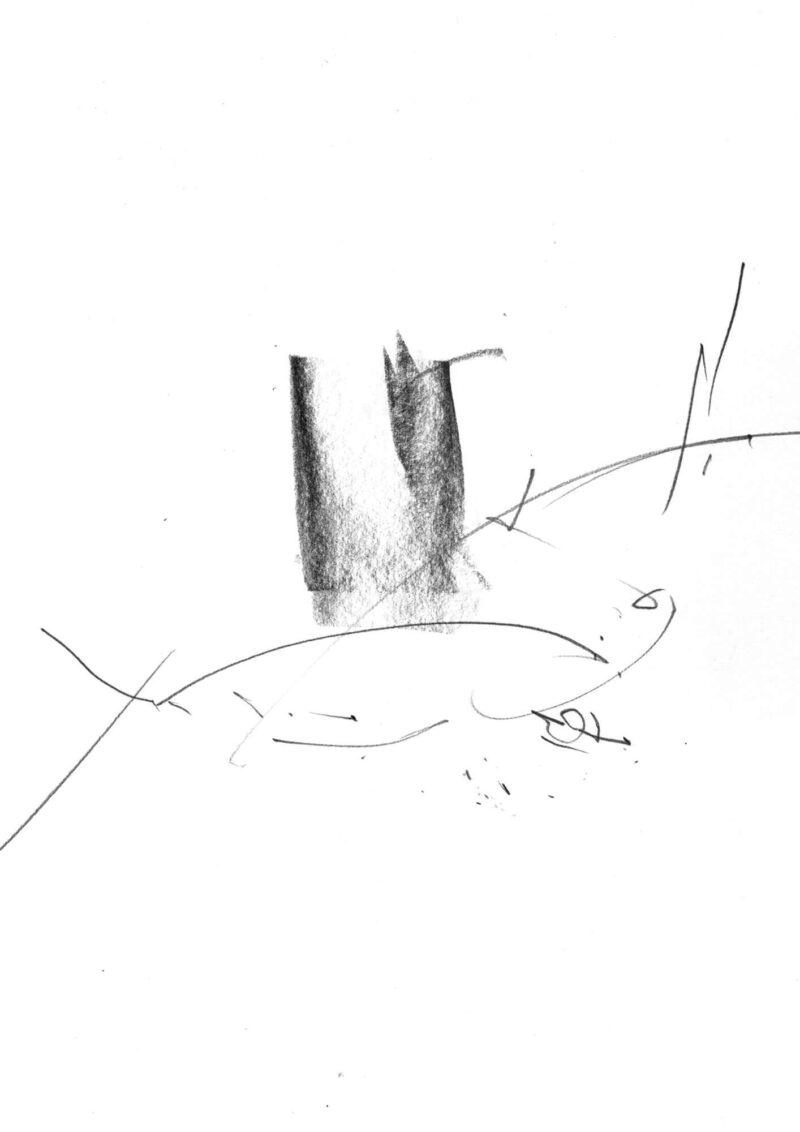 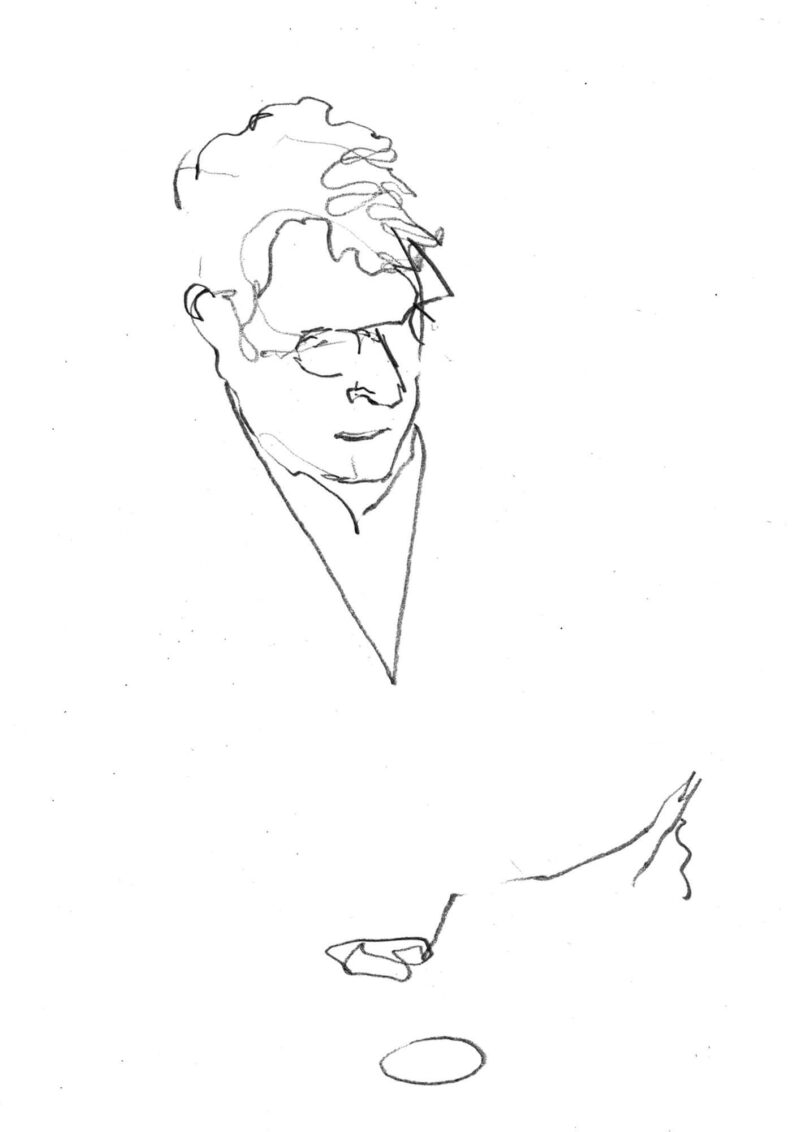 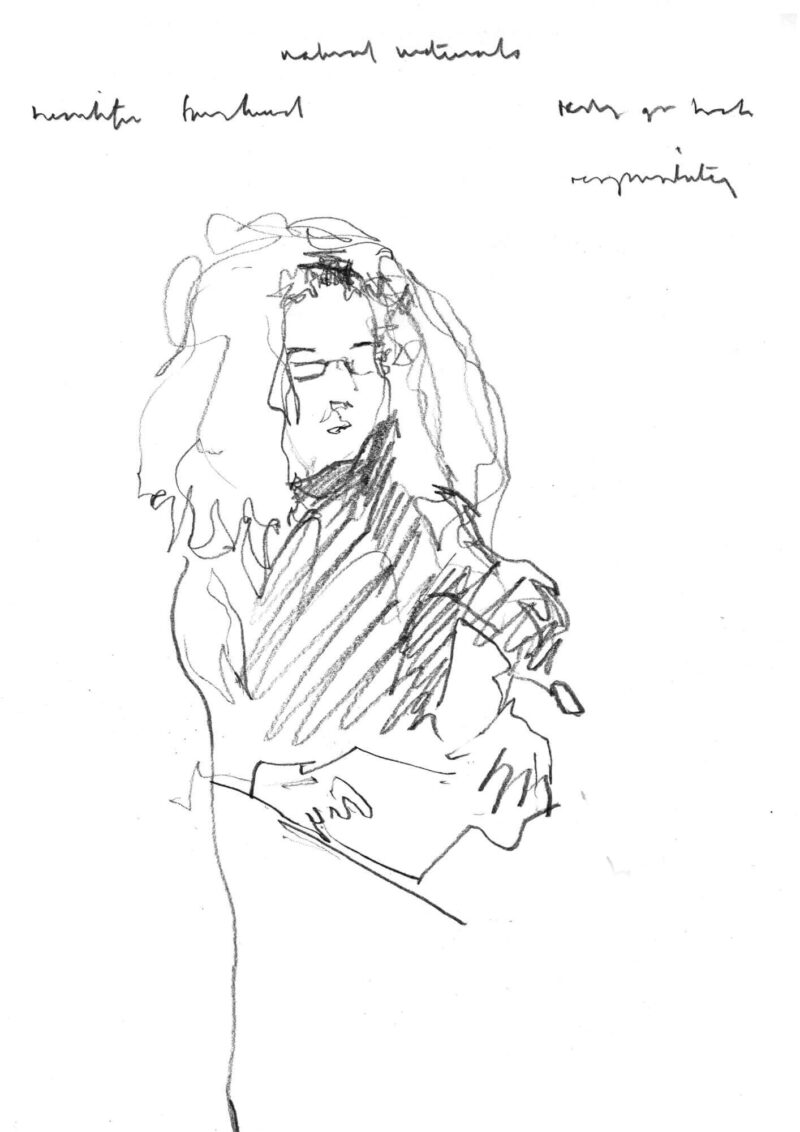 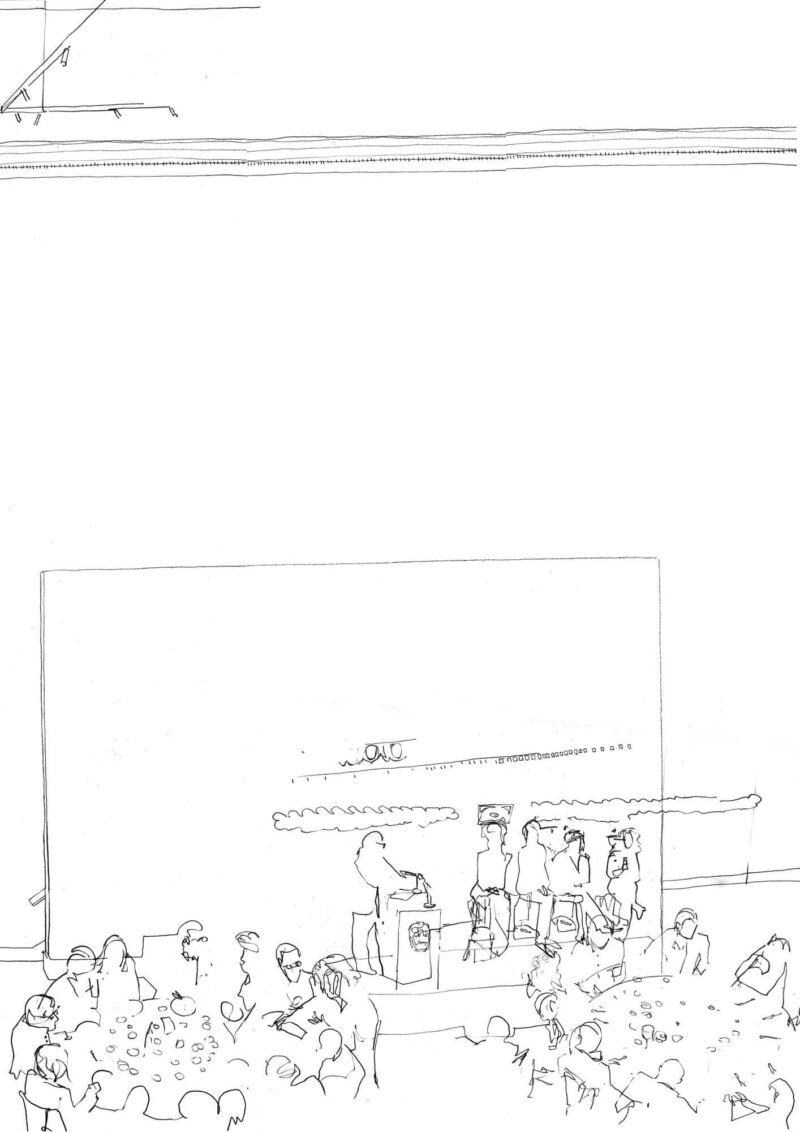 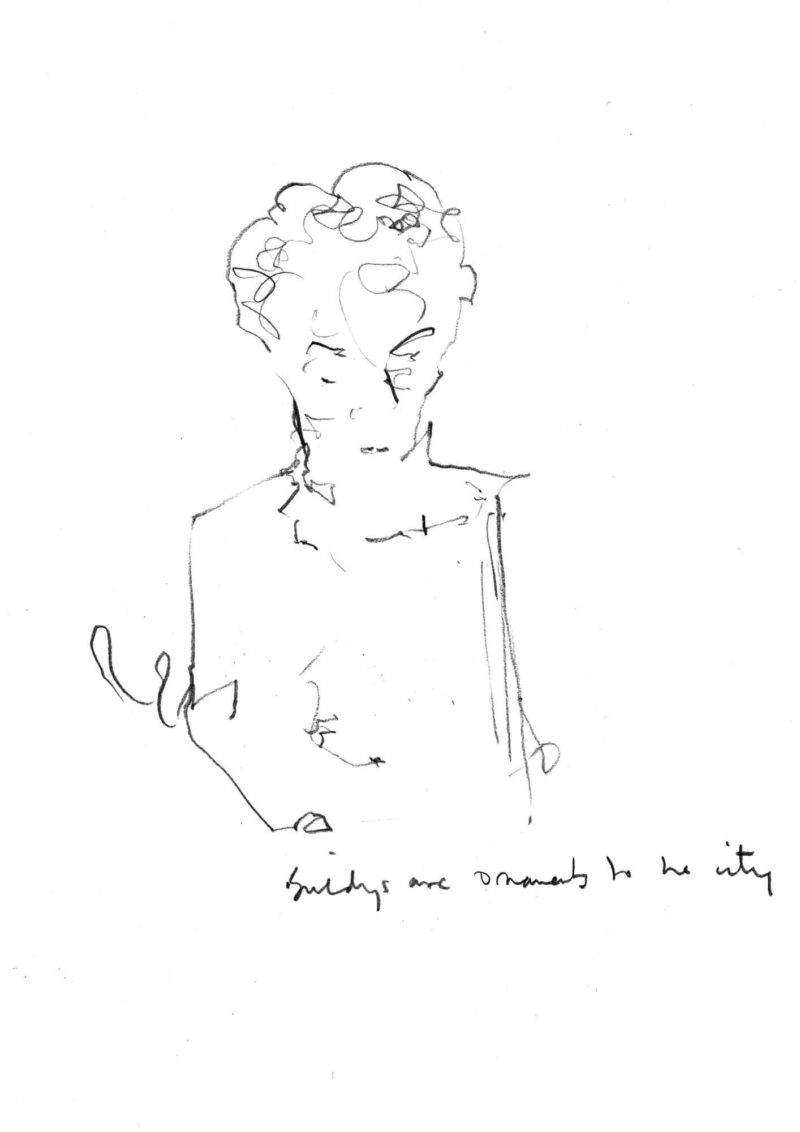 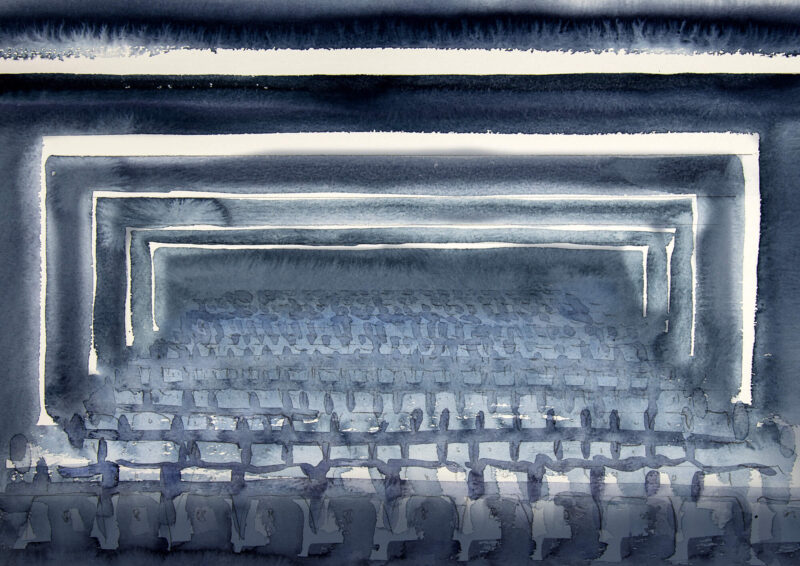 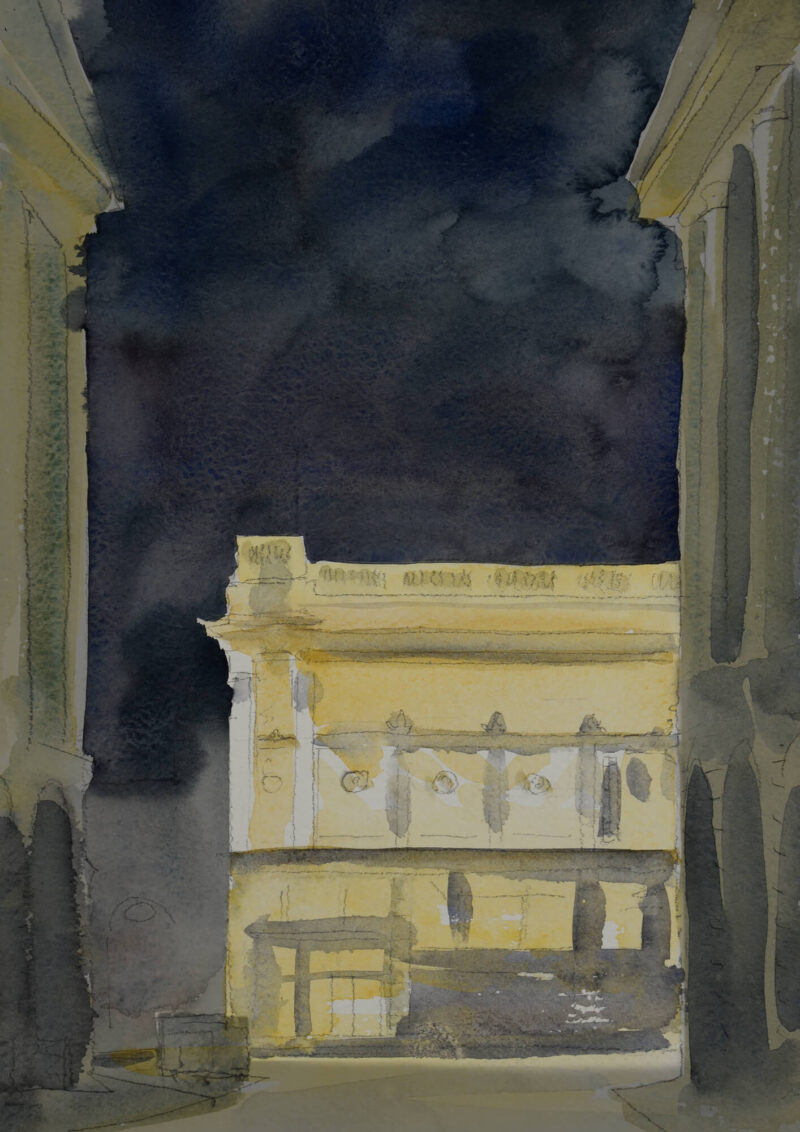 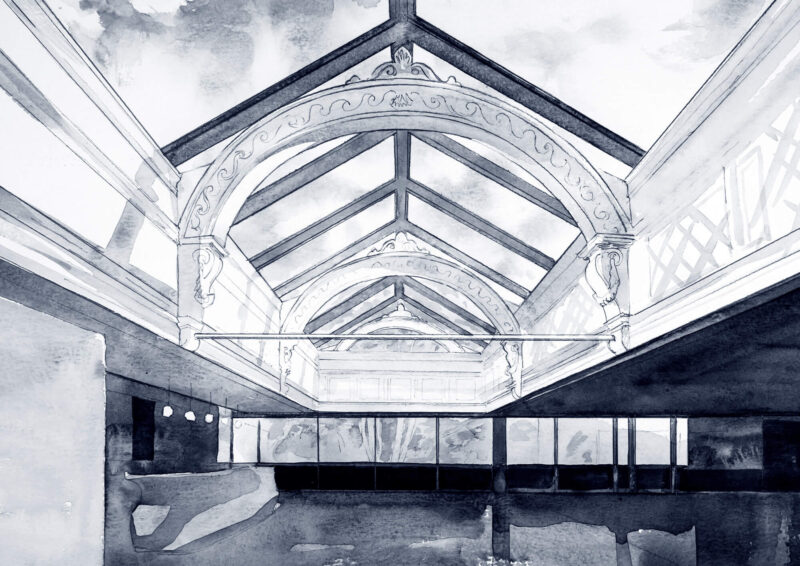